“A clinical trial design that allows for prospectively planned modifications to one or more aspects of the design based on accumulating data from subjects in the trial.” [1]

This is a guest blog post. Originally published on Quanticate.com

In an industry which is under increasing pressure to achieve ‘more with less’, and in an environment where the opposite is true: despite an increase in clinical development costs the number of products making it to the market has decreased. Adaptive clinical trials are generating more interest than ever before.

In the figure below the median/total number of study procedures as well as other indicators of trial complexity are reported for the first decade of this century. Whilst these data might be a bit old, we can reasonably expect that the trend will have at best levelled off, implying that both the investigational sites and the patients face a considerable challenge in dealing with the operational complexity of the trial. Indeed, it is not uncommon to have patients withdrawing from a trial because they do not want to undergo study procedures anymore. In this sense, whilst adaptive trials can’t necessarily reduce the number of needed procedures, they can on the other hand reduce the number of patients that need to undergo them or reduce the duration of the trial. 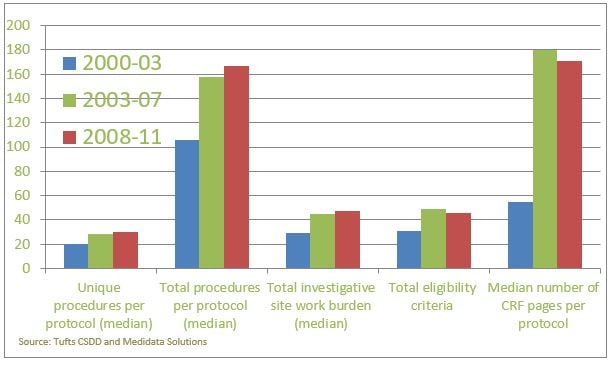 Adaptive clinical trials allow us to plan for potential changes in the study as information is accumulated. This might be, for example, to stop a study early for a failing drug. In fact, one of the first adaptive trials reported in drug development can be considered a success because it allowed early termination due to lack of efficacy, thus preventing an ineffective treatment being tested for a long time with no actual benefit for patients[2].

The possible permutations for adaptive designs could include but are not limited to:

However these changes will only be made in accordance with pre-specified set of rules. 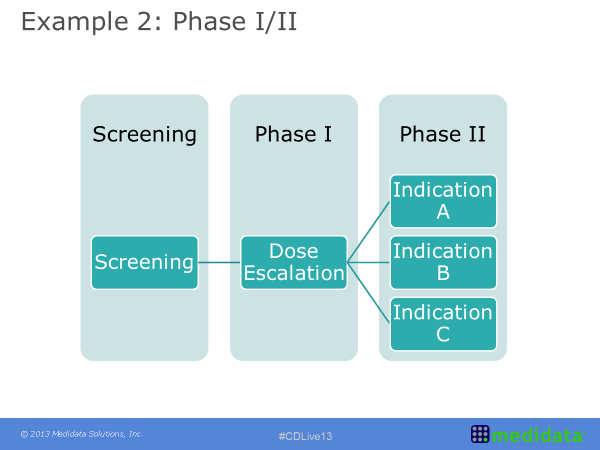 Within oncology clinical study design it is common to see an approach sometimes referred to as the seamless phase one and phase two design. This example refers to a heterogeneous population of solid tumour patients. The initial part was dose escalation with any type of solid tumour.  As the results come through however, the treatment was shown to have a higher effect on some tumour types compared to others. This information was included in the study design by ‘enriching’ the patient population with an increased number of patients with a tumour falling in these most positively impacted classes and by no longer recruiting patients with a tumour on whom the treatment was shown to either be ineffective or having a limited effect. As the trial then progresses from Phase I into Phase II there is the potential for better defining cohorts of patients to analyse (based on either indication, dose level or other), and this ultimately leads to a more efficient study with better tailored questions. These questions are based on earlier looks at the data rather than data analysed after the study has been completed, opposite to scenarios where additional subgroup analyses are planned post-hoc to rescue the study results.

Although adaptive trials may seem the solution to many problems they are not without their own challenges. One main concern is that by allowing changes after randomization has taken place, we open the way to a loss of control over the type I error, thus resulting in an increase of false claim of efficacy. Many adaptation strategies have been discussed in literature that show how this problem can be tackled, but they generally require extensive simulation studies to ensure the error is controlled whilst also achieving the ‘efficiency’ goals the study is designed for. This voices the need for companies embarking on an adaptive trial to either involve their biometrics department at the very initial stage of the planning process or seek the help of experienced statisticians to 1) clarify whether there’s any real benefit in pursuing an adaptive strategy, and 2) defining the set of adaptation rules.

Of these, 1) is somehow more critical because ultimately even a carefully planned adaptation will not serve its ultimate purpose (increase efficiency and overall improve study quality) if adapting is not really required. As an example, think of sample size re-estimation: this is often used when there’s little information on anticipated drug effects and/or their uncertainty, but it can’t be a replacement for a careful literature assessment to identify previous similar studies where to extract information on the clinical effect of relevance.

Alongside statistical challenges (for which a variety of reviews exist in literature [3-5]) one main reason for adaptive trials being still not that popular is the general conservatism that permeates the industry, which is also due to fact that an adaptive trial is often seen as an unneeded risk. As a matter of fact, although adaptive methodologies have been out there for quite a while now, there are not that many case studies for these designs having been successfully submitted to regulatory bodies, and as such a company might be cautious and rather spend an extra amount of money in a standard design yet have a larger confidence that positive results will still be valued as sufficient for approval.

The full article was originally published on Quanticate.com

Statsols Head of Statistics & nQuery Lead Researcher, Ronan Fitzpatrick had the opportunity to sit down with Professor Stephen Senn to talk about Adaptive Design and Early-Phase Clinical Trials. 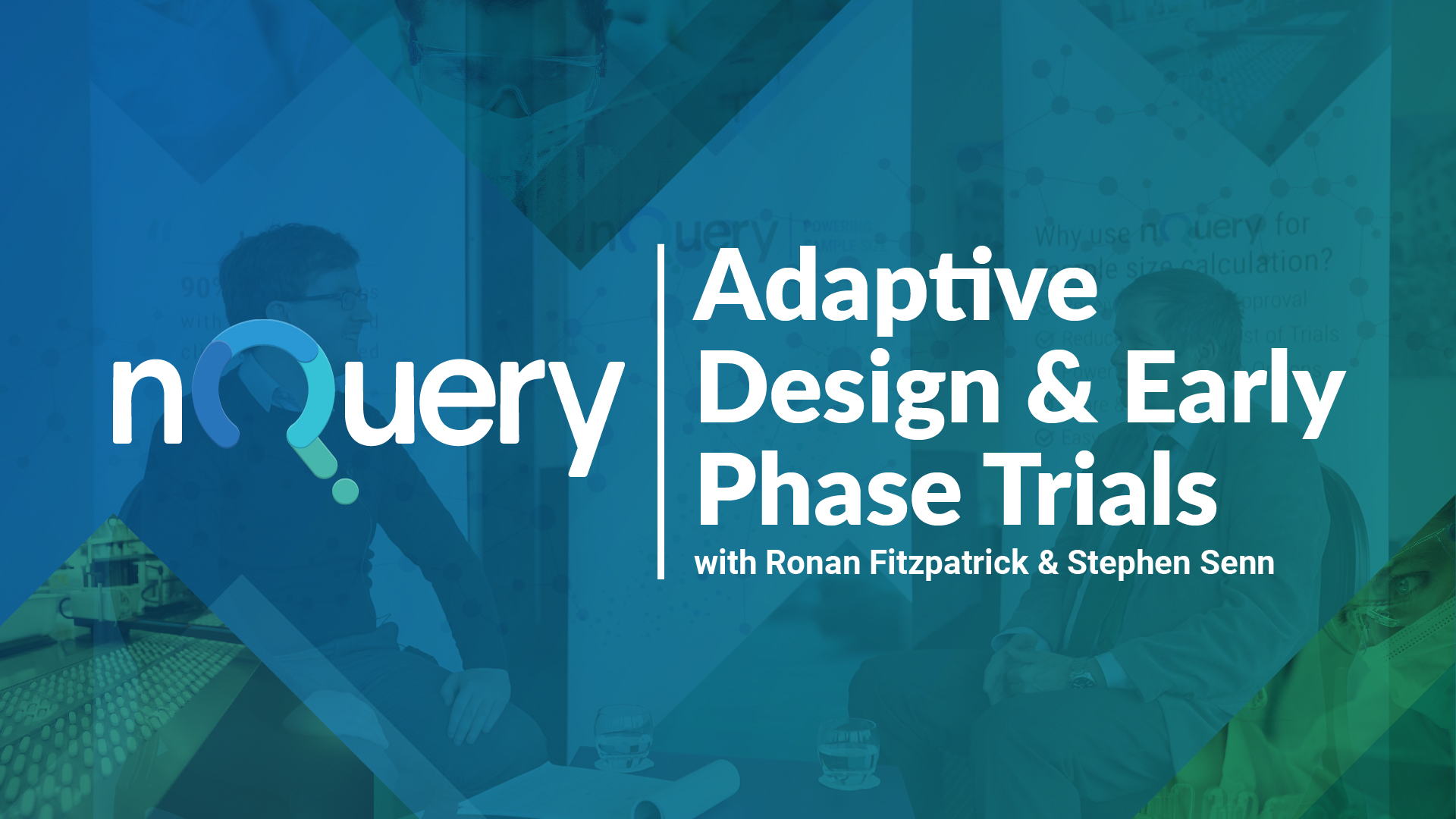